What they're saying about The Coin of the Realm.

“…On the surface, at the level of turning pages as quickly as one can, this is a riveting adventure story. Deeper down it is a reflection on the choices we make and how we work out our own destinies, whether with magic, by fate, or through Divine Providence... Dubin is a fine, at times even a poetic, writer. His sense of plot, setting and character are excellent…the story is compelling, the prose rich, and the themes haunting. I found myself thinking about the book long after the leading characters had reached physical safety, wondering whether they might be on the way toward spiritual safety, too... It is encouraging that [Dubin] is at work on another novel. I’ll eagerly await the result, but with no less gratitude for his remarkable first novel, The Coin of the Realm.”


“...It’s hard to believe that this is [Roger] Dubin’s first novel. His command of detail and style as he tantalizes the reader with descriptions of exotic lands and even more varied and colorful characters is excellent. Dubin’s images are so concrete that the reader is instantly drawn into the scene… The Coin of the Realm sweeps the reader along on a current of adventure and danger with a splash of humor. Yet undercurrents of choice, faith, one’s purpose, the dignity of individual lives, and love call us into deeper considerations… The Coin of the Realm manages to encompass several genres and will entertain and intrigue readers of adventure, mystery, romance, travel narratives, and introspective coming-of-age stories alike. I highly recommend [Roger] Dubin’s first novel, and I look forward to more like it.”


"Roger Dubin has accomplished something with his first novel that every fiction writer desires: a book that utterly transports the reader into the story's universe. In part, he achieves this in The Coin of the Realm through his fully realized characters and artful turns of phrase. In fact, Dubin's prose often reaches a kind of lyricism that is all too absent from most adventure/thriller stories."


"With its sure-handed style and literary polish, one is hard-pressed to accept that The Coin of the Realm is a first novel. This is pure adventure storytelling, yet intertwined with the eternal quest for truths that lie just beyond our grasp. Seagoing exploits aboard Caroline Coast, a ramshackle freighter, conjure passages of Patrick O’Brian—distinct praise indeed. But whether the scene is set in the Great Lakes, the Atlantic, Tunisia, or the Sahara, the author keeps the pace moving and the excitement high, using action and mystery to skillfully project us into the minds and hearts of his characters. Roger Dubin has proven he's a writer to watch."

—Anthony Eglin, author of The Blue Rose,
The Lost Gardens, Trail of the Wild Rose, The Water Lily Cross,
and Garden of Secrets Past (St. Martin's Press)

"The Coin of the Realm is hard to categorize yet easy to love. On one level it's a gripping thriller with exotic locales, memorable characters, and a compelling romance; while just beneath the surface swirl mysteries of destiny, purpose, the intricate workings of fate, and the ultimate sources of meaning in life. The novel's transcendent themes will haunt the reader long after the 'thrill[er] is gone.' I recommend it most highly."

—Roy Schoeman, author of Salvation is from the Jews and Honey from the Rock (Ignatius Press) visit his site 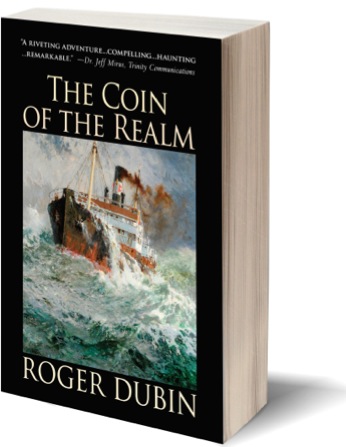